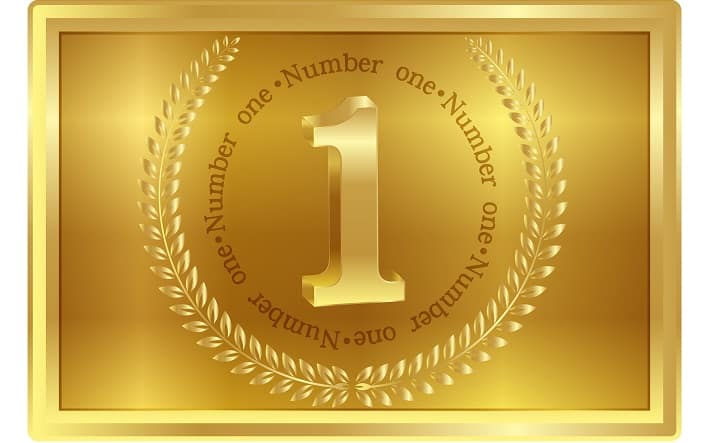 In the Western tradition, being “number 1” is synonymous to being the best.

The number 1 symbolizes the leader.

It is the number of confidence.

One is the number of the human being, the only creature on earth to stand up straight on two legs.

It is a divine number, the number of the One God.

The Pythagoreans referred to number 1 as the “monad”. It symbolized the creator.

It is a male number. Number 1 represents strength.

One is also the number of the loner, someone who will not follow the crowd.

One symbolizes the creative spirit and individuality.

The longest word in the English language containing only one vowel is “strengths”!

In science, hydrogen is the atomic number 1.

Number 1 is the international country calling code for North America.

October 1st is the International Day of Older People. This day was established by the U.N. in 1990.

New Zealand was the first country to give women the right to vote in 1893.

Aries is the first astrological sign in the Zodiac. (March 21 to April 20)

Number 1 in the Tarot Deck

In Tarot, the number one is the card of the Magician.

The Magician symbolizes willpower and the capability to achieve goals.

Reversed it symbolizes that talent is abused in some way.

It could be some of your actions or lack of actions are hindering you from reaching your full potential.

Mother of Jesus in the Qur’an

There is only one sura (chapter) in the Qur’an named after a woman. That is sura 19 named Maryam.

Maryam is the mother of Jesus.

In Islam the Virgin Mary is called Maryam and Jesus is called Isa.

Maryam is the only woman mentioned by name in the Qur’an.

She is actually mentioned more times in the Qur’an than in the New Testament of the Bible.

In Vietnam the first person to enter the home the first day of the New Year is of vital importance.

The first person to enter a house must be with superior intentions and morality if the home is to receive good blessings in the year to come. This is the reason nobody visits a home without an invitation on New Year day.

Just to be on the safe side it is quite common for the owner of the house to leave the house a few minutes before midnight and return shortly after the clock strikes twelve.

Every precaution is taken that no one enters the home first who does not have a solid desire of the wellbeing of the household.

Alexey Arkhipovich Leonov (from Soviet/Russia) was the first human to conduct a spacewalk on March 18,1965.

Valentina Tereshkova (born 1937) from the Soviet Union was the first woman in space in 1963.

Matthew Webb from England was the first person in the world to swim the English Channel in 1875.

He drowned in 1883 while attempting to swim the Niagara rapids.

Peter the Great (1672-1725) was the first Russian Tsar to travel outside of Russia. In 1697 he went on an 18 month long journey through Western Europe with a large Russian delegation.

Sir Isac Newton was the first scientist ever to be knighted. He was knighted in April 1705 by Queen Mary at Trinity College, Cambridge. Sir Isac Newton is buried in Westminster Abby in London, England.

Roald Amundsen (1872 – 1928) a Norwegian explorer was the first person to reach both the North and South Poles.

Queen Victoria of the United Kingdom (May 24, 1819 – January 22, 1901) became the first monarch to take up residence at Buckingham Palace.

George Washington was the first president of the United States. 1787- 1797

Washington owned over a hundred slaves. He left a clause in his will that the slaves were to be freed. He was a Freemason and on April 29, 1788, he was appointed Worshipful Master of Alexandria Lodge 22.

Theodore Roosevelt (1858 – 1919) was the first American to win the Nobel Peace Prize in 1906. He negotiated an end to the Russo-Japanese War.

Theodore Roosevelt was the first president to appoint a representative of the Jewish minority to a cabinet position, Secretary of Commerce and Labor, Oscar S. Straus.

Liberia is the first African nation to elect a female president.

Ellen Johnson Sirleaf won the Nobel Peace Prize 2011. She shares this prize equally with Leymah Gbowee and Tawakkul Karma. They won the prize for “for their non-violent struggle for the safety of women and for women’s rights to full participation in peace-building work” according to the Norwegian Nobel Peace Prize committee.

Colette was the first woman in France who was given state funeral. Due to her divorces, she was refused the Roman Catholic rites.

The Penny Black was the world’s first adhesive postage stamp used in a public postal system. It was issued by the United Kingdom of Great Britain and Ireland on 1 May 1840.

The UK is the only country in the world that is not required to put its country name on its stamps.  The UK uses only the profile of the current monarch’s head on its stamps.

The Number One Room

Inside the Clock Tower, popularly referred to as the Big Ben, is a prison room known as ”the number one room”. Any person who misbehaved during debates in the Houses of Parliament could soon find themselves imprisoned in the “number one room”. This prison cell was last used in 1880.

Vincent van Gogh only sold one painting during his lifetime. The painting was named “Red Vineyard near Arles”, painted in 1888. He sold it in 1890 for 400 Frances.

The buyer was Anna Boch. She was also a painter and her brother was a friend of Vincent van Gogh.

The painting is now in the Puskin Museum, Moskva, Russia.

The First Mammal to be Cloned

Dolly was cloned at the Roslin Institute in Scotland.

Dolly’s remains are exhibited at the Royal Museum of Scotland.

This site uses Akismet to reduce spam. Learn how your comment data is processed.